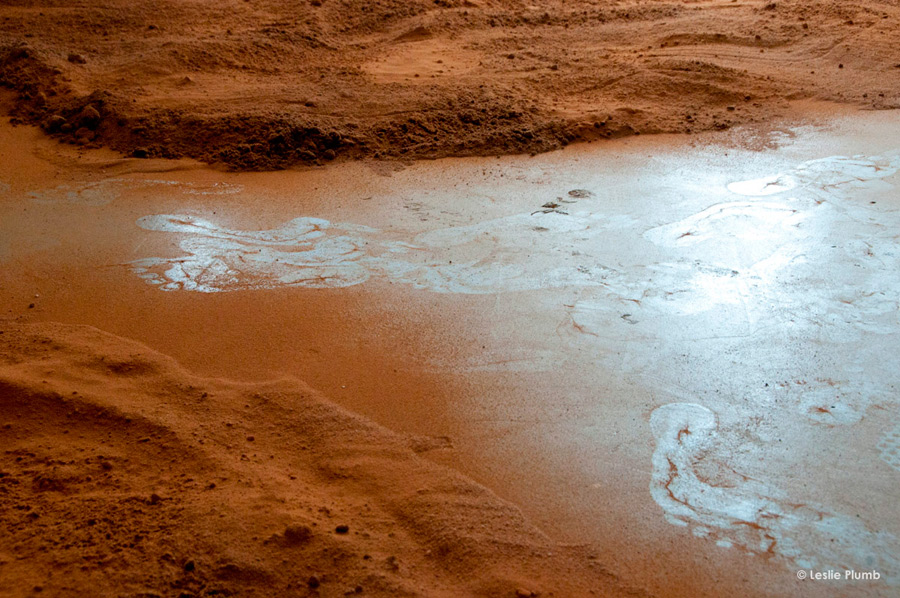 Smell like sand has a way of embedding itself into you: your skin, your scalp, the little crevices at the top of your ears, the bottom insides of your shoes reeking of memory. It fills me with an unexpected sense of nostalgia and longing for last night on the beach (the low lights, the laughter, the danger of being discovered and the nearness of you.) Our bodies left slight impressions on the sand.

“I’m always trying to move into the holes,” I hear Erin Manning tell someone I don’t know the night of the opening outside in the yard.

Upstairs at Glasshouse, Weather Patterns: The Smell of Red is already at work.

By work, I mean in one way a sharpening of senses. Artists Erin Manning and Nathaniel Stern, with Marcelino Barsi, have expertly if not tendentiously created conditions for the impossibility of being intimately uninvolved. The work seeps into you, dissolves and electrifies.

Tapping into weather as a medium, the installation incorporates sculptural elements including pungent spices and various fans as a proposition to, in their words, co-compose weather. It performs on you; it elicits from you a performance that unfolds.

Weather Patterns: The Smell of Red builds conditions for fluid encounters and intangible exchanges by producing a slipping of spaces and heightened awareness of one’s own body, welling up the state of existing within or having a relationship with time and memory.

Three, dispersed white pillar-like structures extend from floor to ceiling in the gallery upstairs at Glasshouse. Around each base crawls a pile of cinnamon.

The structures are interrupted in the middle with a series of thin, clear tubes placed in a circle, in the middle of which a delicate tornado spins. Its appearance, however, is dependent on the positionality of the observer. Unseen in the bottom cavity of the structure is a water ionizer, and a fan in the top cavity. The combination of the fan pulling air upwards and the perforations in the tubes in a circle causes the air to get pushed around, creating a tornado. If moved towards too suddenly, the tornado dissipates. It eventually re-forms given suitable conditions.

Not to mention the handful of quietly, whirring fans affixed to the walls at varying heights that circulate the air and effect the tornadoes to some extent. Particles of cinnamon fly up into the tornadoes and become skin to the whirling air.

All the while the smell of red becomes skin to the air in the space at large. It’s a retreat back to the lungs, altering you at the level of cells.

Perhaps only felt in the room are sentimental constructions.

Interior and exterior spaces slip between body and atmosphere. A tornado folds in on itself in a series of curves like the surfaces of memory and time. There is a sinuosity, an interface of linings of insides. The installation connotes the precariousness of memory and unstable form. The slipping of space produces orientations meeting on a curve.

A body around the tornado attunes itself to the vanishing of the object.

For it might be said that one cannot experience the installation without seeing the tornado. So the body learns the conditions for an appearance on a plane and, mired in the senses, the process by which you register a thing, perhaps a secret, in the body.

Will you keep it to yourself? Can you hold something there? Where in the body has an interval space opened up?

Form and meaning grow through individual and collective interactions in public space.

Weather Patterns: The Smell of Red materializes conditions for bodies to come together in unexpected ways across becoming mercurial fields. At a certain alignment of body and object, a dancing of the field occurs. The contours of a tornado’s body is an unfurling line folding in on itself around an empty space. It show us how to move into zero, the holes, patterning behaviors.

Weather Patterns: The Smell of Red was co-produced by Erin Manning and Nathaniel Stern with Marcelino Barsi, and curated by Jennifer Johung at Glasshouse in Brooklyn, New York during June 2014.